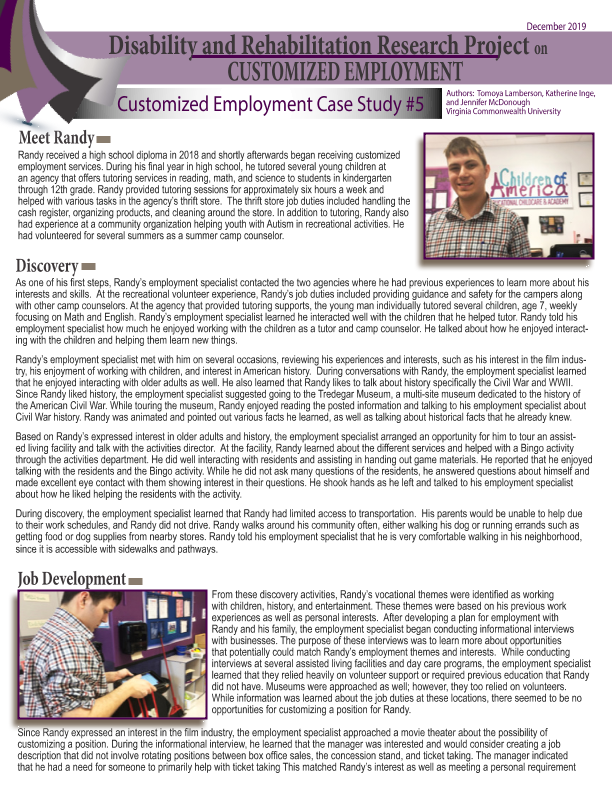 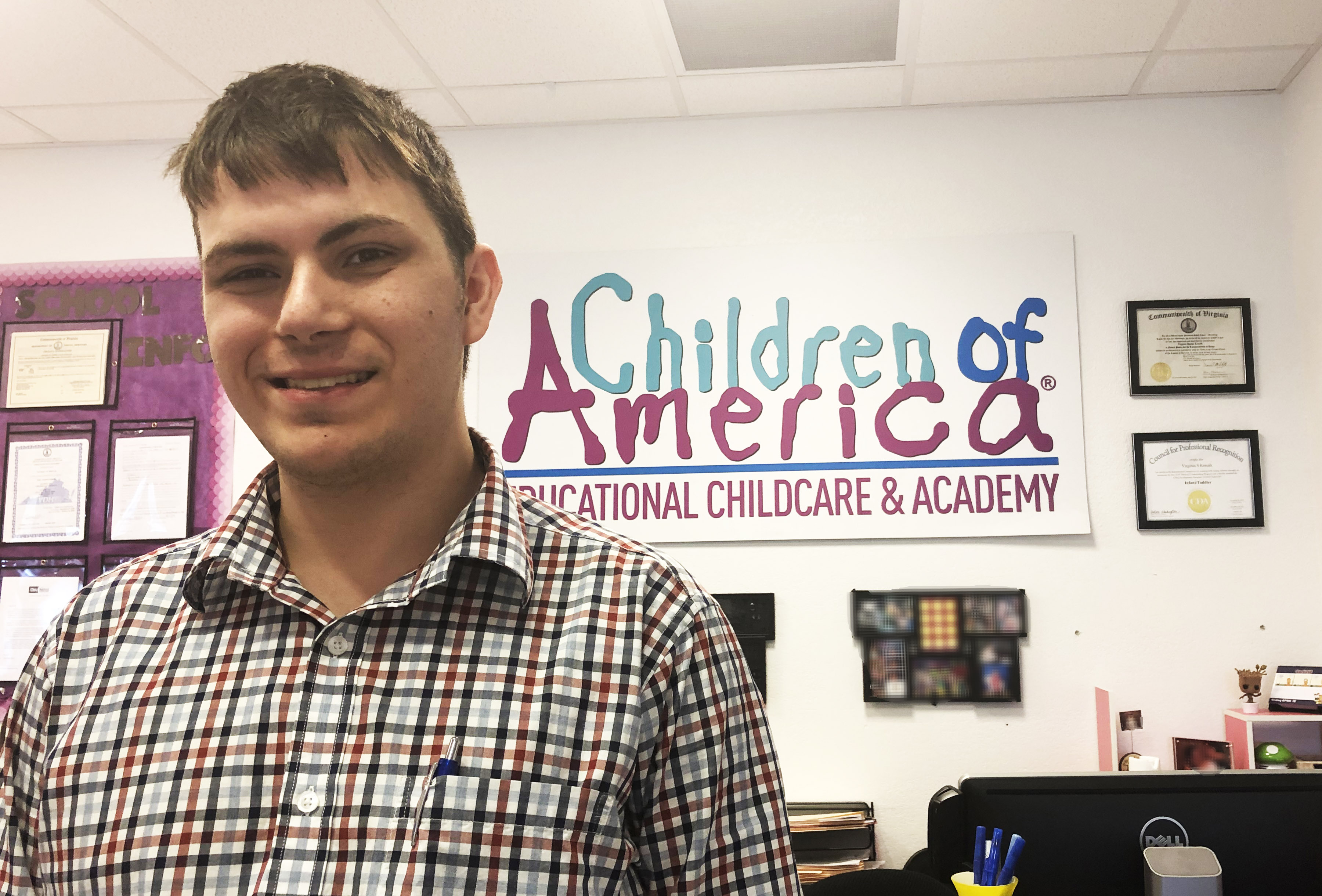 Randy received a high school diploma in 2018 and shortly afterwards began receiving customized employment services. During his final year in high school, he tutored several young children at an agency that offers tutoring services in reading, math, and science to students in kindergarten through 12th grade. Randy provided tutoring sessions for approximately six hours a week and helped with various tasks in the agency’s thrift store. The thrift store job duties included handling the cash register, organizing products, and cleaning around the store. In addition to tutoring, Randy also had experience at a community organization helping youth with Autism in recreational activities. He had volunteered for several summers as a summer camp counselor.

Randy’s employment specialist met with him on several occasions, reviewing his experiences and interests, such as his interest in the film industry, his enjoyment of working with children, and interest in American history. During conversations with Randy, the employment specialist learned that he enjoyed interacting with older adults as well. He also learned that Randy likes to talk about history specifically the Civil War and WWII. Since Randy liked history, the employment specialist suggested going to the Tredegar Museum, a multi-site museum dedicated to the history of the American Civil War. While touring the museum, Randy enjoyed reading the posted information and talking to his employment specialist about Civil War history. Randy was animated and pointed out various facts he learned, as well as talking about historical facts that he already knew.

Based on Randy’s expressed interest in older adults and history, the employment specialist arranged an opportunity for him to tour an assisted living facility and talk with the activities director. At the facility, Randy learned about the different services and helped with a Bingo activity through the activities department. He did well interacting with residents and assisting in handing out game materials. He reported that he enjoyed talking with the residents and the Bingo activity. While he did not ask many questions of the residents, he answered questions about himself and made excellent eye contact with them showing interest in their questions. He shook hands as he left and talked to his employment specialist about how he liked helping the residents with the activity.

During discovery, the employment specialist learned that Randy had limited access to transportation. His parents would be unable to help due to their work schedules, and Randy did not drive. Randy walks around his community often, either walking his dog or running errands such as getting food or dog supplies from nearby stores. Randy told his employment specialist that he is very comfortable walking in his neighborhood, since it is accessible with sidewalks and pathways. 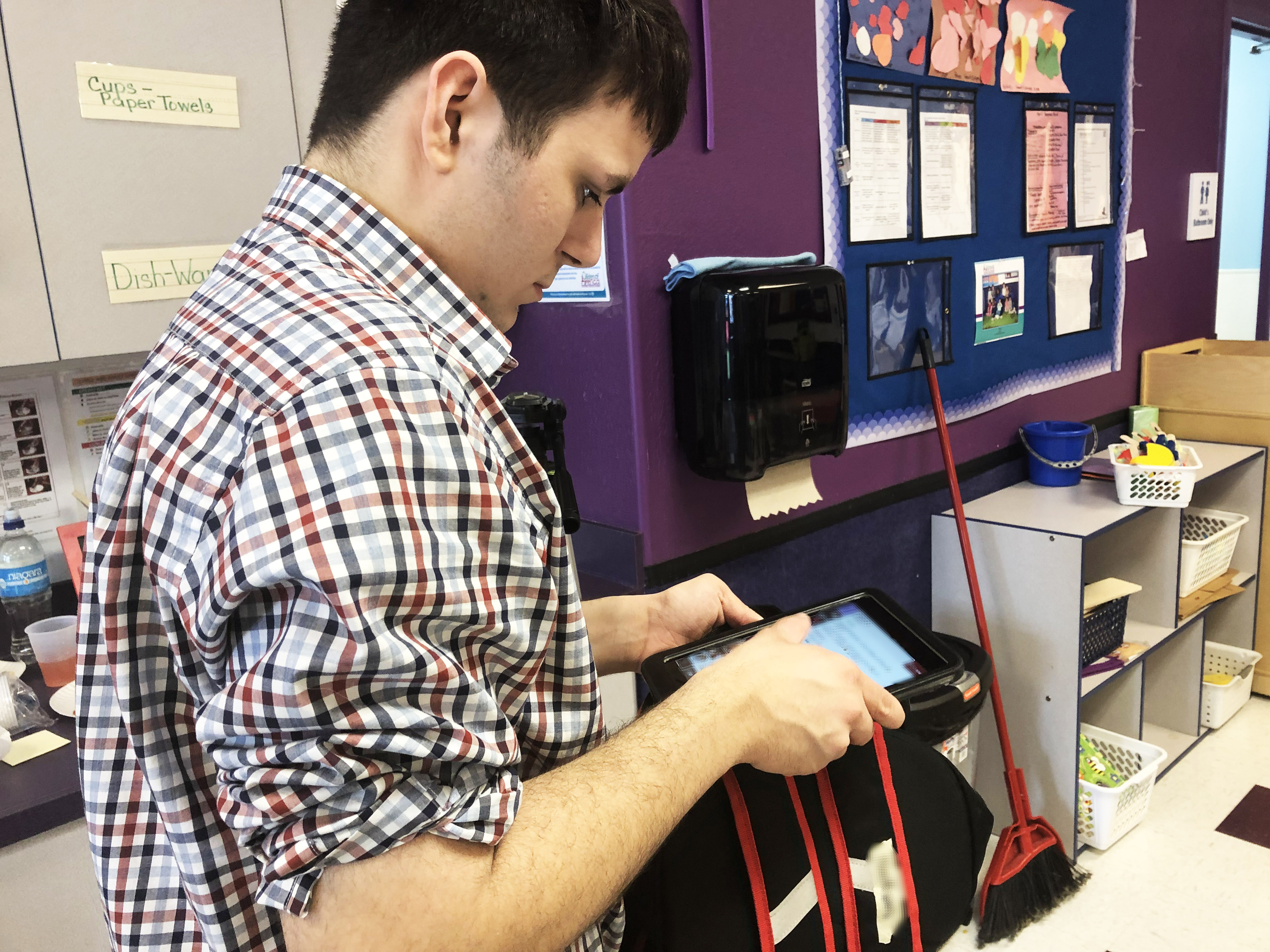 From these discovery activities, Randy’s vocational themes were identified as working with children, history, and entertainment. These themes were based on his previous work experiences as well as personal interests. After developing a plan for employment with Randy and his family, the employment specialist began conducting informational interviews with businesses. The purpose of these interviews was to learn more about opportunities that potentially could match Randy’s employment themes and interests. While conducting interviews at several assisted living facilities and day care programs, the employment specialist learned that they relied heavily on volunteer support or required previous education that Randy did not have. Museums were approached as well; however, they too relied on volunteers. While information was learned about the job duties at these locations, there seemed to be no opportunities for customizing a position for Randy. Since Randy expressed an interest in the film industry, the employment specialist approached a movie theater about the possibility of customizing a position. During the informational interview, he learned that the manager was interested and would consider creating a job description that did not involve rotating positions between box office sales, the concession stand, and ticket taking. The manager indicated that he had a need for someone to primarily help with ticket taking This matched Randy’s interest as well as meeting a personal requirement for employment. During discovery, the employment specialist learned that Randy could not work around food due to a severe food allergy to peanuts and dairy products. After talking with his employment specialist, Randy indicated that he would be interested in the customized ticket taking position. However, after meeting with the employer, he realized that the job would begin during the holiday season. He was not available since he had plans for travel with his family. Unfortunately, the theater was not able to customize this aspect of the position. 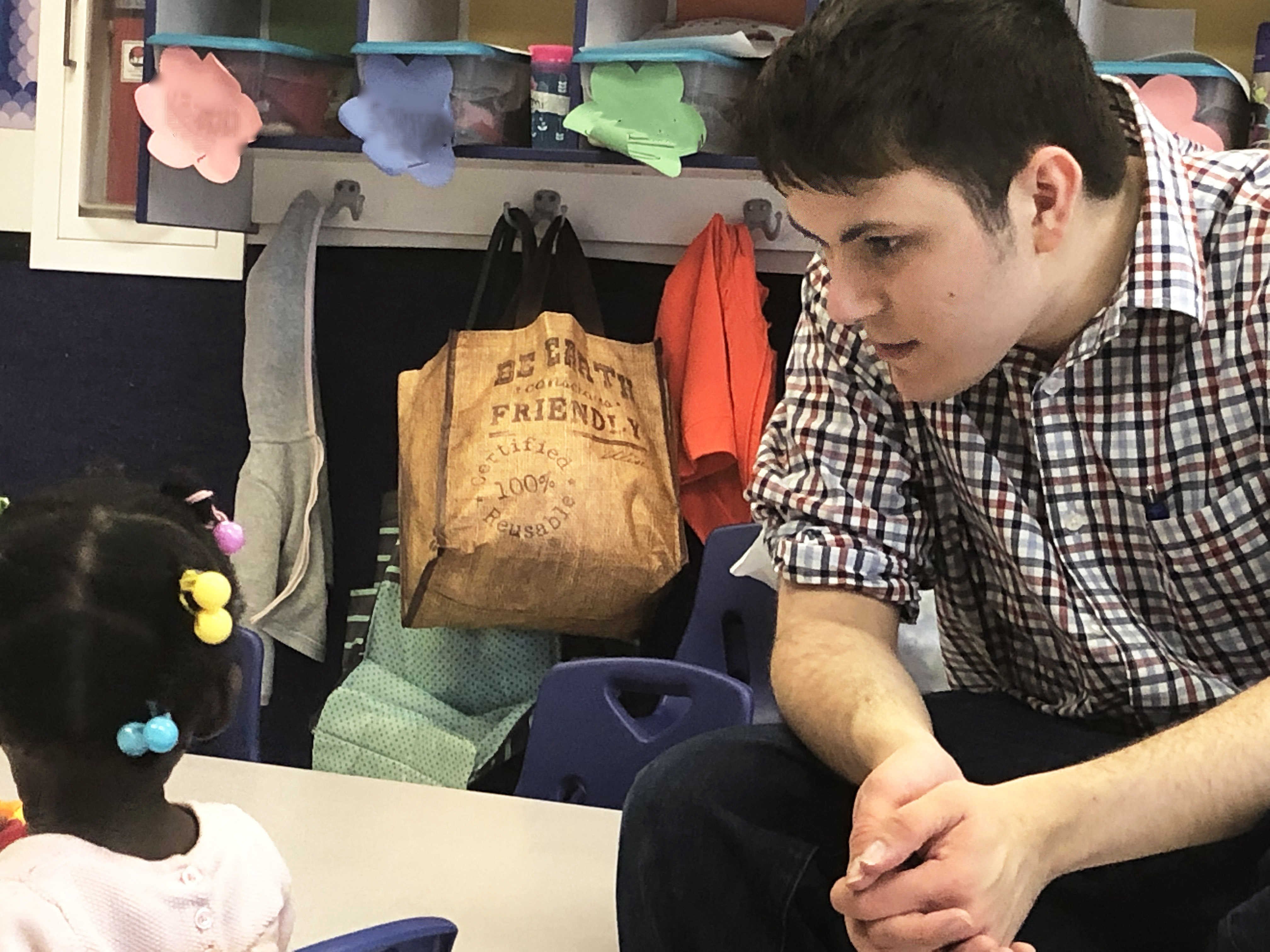 The next step was for Randy to meet with the director and tour the facility. Randy then had the opportunity to shadow a teacher including observing classes and learning about procedures. After the observation, Randy expressed his interest in working at the day care and how he enjoyed seeing the teachers interact with the children. A position was customized for him to work with age groups 5-12, Monday through Friday for four hours each day, earning $10.20/hr. The close proximity to Randy’s home allowed him to independently walk to and from work for each shift. The employment specialist accompanied him for several shifts to ensure that he was aware of how long it took to walk and to confirm that he had safe travel skills.

Randy’s job duties include assisting the teachers in keeping track of the children, interacting with them, promoting safety, providing and cleaning up snacks, picking up/cleaning cots after naptime, accompanying the children to the outdoor play area, occasionally cleaning dishes, and assisting with other tasks at the teachers request. He learned how to effectively interact with children of various age groups. 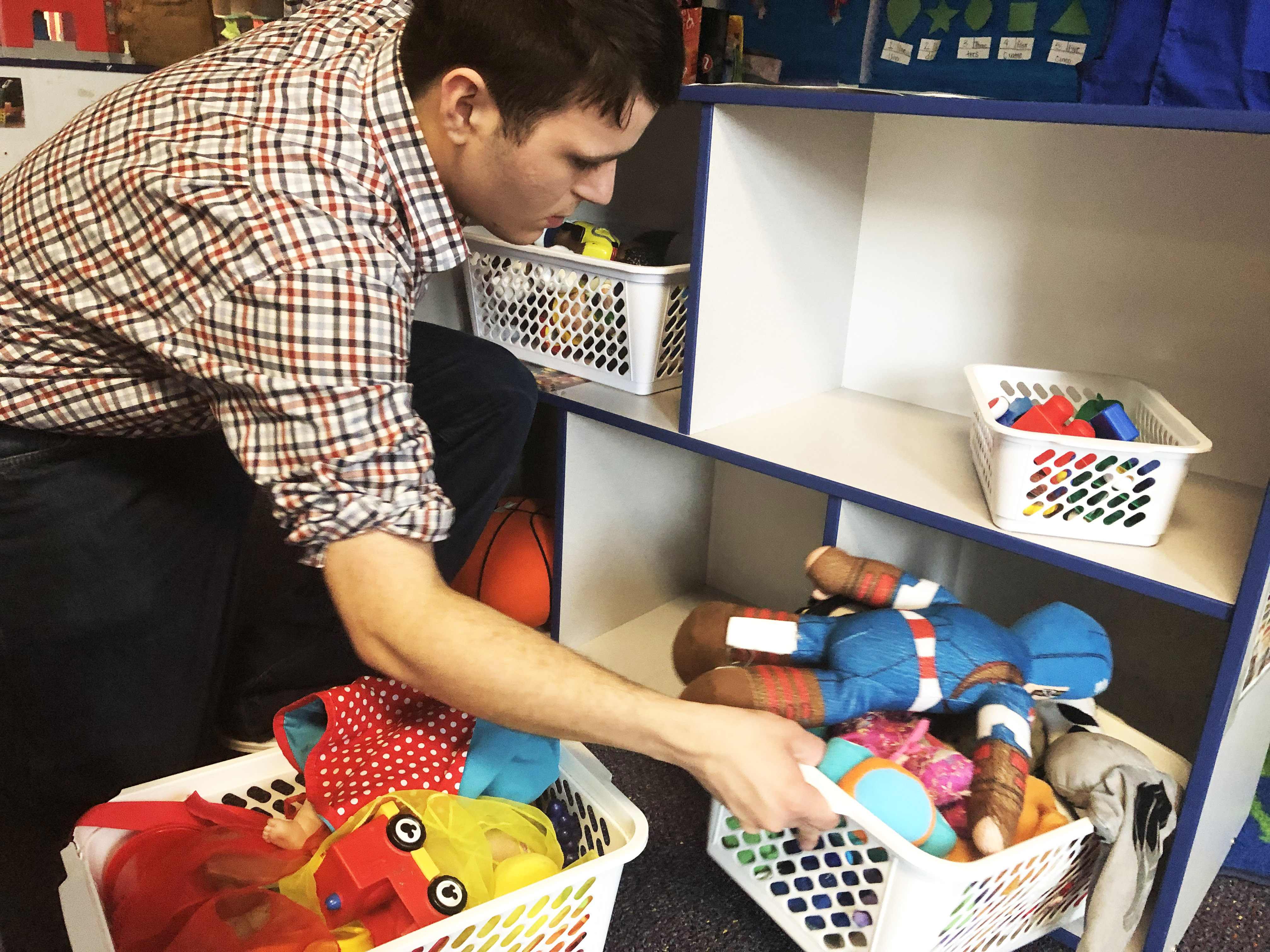 While initially hesitant in working with the younger ages, his employment specialist learned that he became more comfortable with more exposure and hands on support from his coworkers. Randy tried assisting in infant care rooms and younger children from 1-3 years old. He became more comfortable with the various age groups through increased exposure and demonstrations along with natural supports from his coworkers.

Randy is eager to be successful and asks questions to make sure that he is doing a good job. His employment specialist noticed that he seemed to appear uncomfortable when children screamed or cried loudly. Randy reported that he did not like the loud screaming or crying. The solution was for him to learn how to calm the child down or shift his focus on another task while the teacher addressed the screaming. His employment specialist learned that implementing this redirection helped Randy cope with a situation where he was initially uncomfortable. 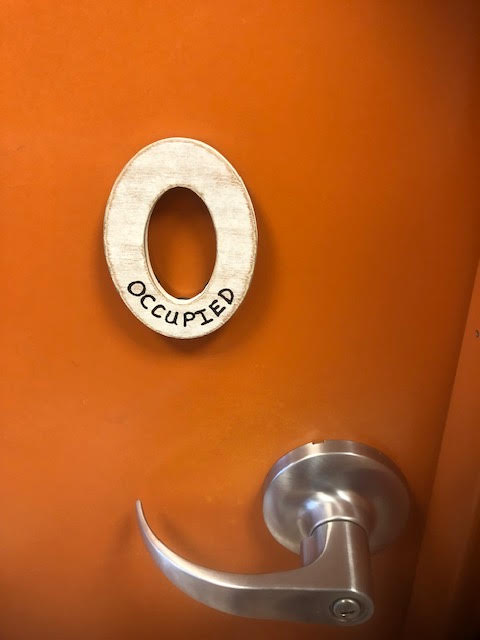 One day, staff at the day care center called Randy's employment specialist concerned about an incident. Randy was found crying after a coworker walked in on him in the bathroom. Randy reported that he was afraid someone would think he had done something wrong. The employment specialist assured him that he was not in trouble, and they worked together to develop a plan so this would not happen again. After having a discussion with the manager, the employment specialist created a magnet with the letter "O" for occupied. Randy places the magnet on the outside of the door when occupied and returns it to the inside when he leaves. His coworkers also like to use this cue, and the issue was solved for everyone! Randy is now independent on his job supported by his coworkers! He reports being very satisfied with his job and working at the day care facility. 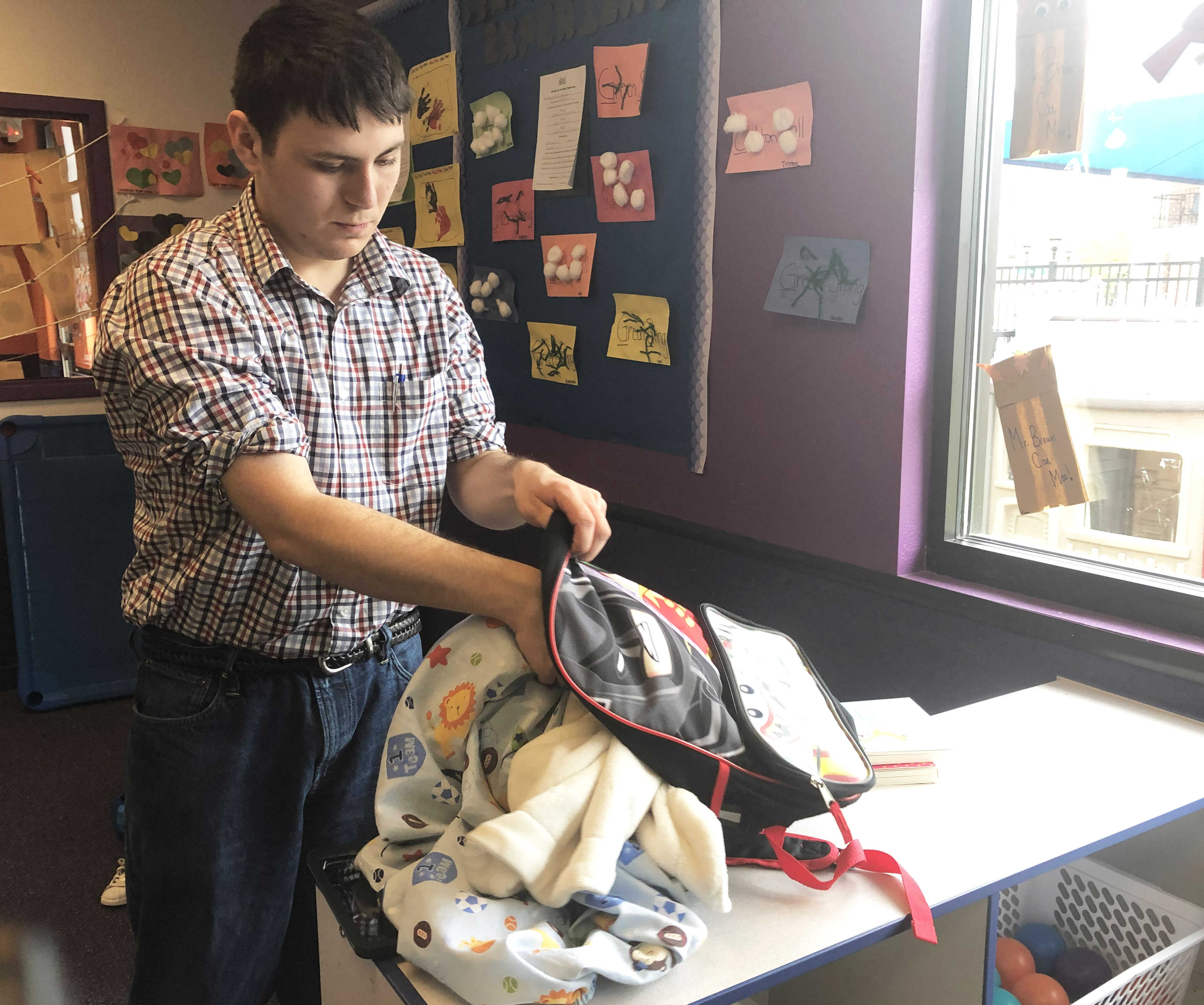 The Disability and Rehabilitation Research Project (DRRP) on Customized Employment at VCU is funded by the National Institute on Disability, Independent Living, and Rehabilitation Research (NIDILRR grant number #90DP0085). NIDILRR is a Center within the Administration for Community Living (ACL), Department of Health and Human Services (HHS). The contents of this resource do not necessarily represent the policy of NIDILRR, ACL, or HHS, and you should not assume endorsement by the Federal Government.